We have a chihuahua that I can’t stand.

We have a fish that appeared over night.

There is a bird in Sam’s room that bites me.

We finally got rid of a hamster whose roll wheel kept me up at night squeaking.

The cat that stays outside is the only animal I remotely like at our house.

Carolyn yelled at me on Tuesday from her office to “come here quick!!!!” I jumped up and ran back there. To my horror, the cat had a baby squirrel, and was preparing it for dinner. Carolyn was just watching.”What are you doing, you sicko!?” I exclaimed and ran out the back door.

Apparently the door slamming startled the cat and allowed the squirrel to leap onto the nearest tree. It was barking/squeaking. And it was cute.

My photoset at Flickr probably tells the story best.

What happened next was a tragedy. I allowed Carolyn to talk me out of keeping it. I envisioned putting it in the chihuahua’s kennel and raising it with TLC&A (tender loving care & acorns). Carolyn didn’t think that was fair to the chihuahua. Mind you, this is the same demon (the dog, not Caro) that bit through my fingernail last month when I was trying to put her in her kennel.With regret, I placed the squirrel back on the tree, and watched it slowly climb up a ways.

As I entered the house, a surge of determination overcame me. I will have the squirrel for a pet. This is nuts, I thought. I hurried back outside, to see to my dismay that the squirrel was higher than I could reach. I ran and got a ladder and placed it clumsily against the tree. The wobbly climb began.Little did I know that Squirrel Hater (previously known as my wife) was laughing her head off as I delicately climbed the ladder – and taking pictures.

I got to the top rung and for a brief moment, grasped the squirrel’s tail, but was unable to dislodge it from the tree without also dislodging myself. It was then that I realized that I was dangerously close to falling. I had a death hug on a pine tree. And here came SH – the photographer I live with…

Anyway, I think I’m over it today… But I still wish I had a pet squirrel. Its parents (or two larger squirrels) found it, and they were building a nest in the pine tree out back on Wednesday. Buddy (as I have now named him) could be seen watching from about 20 feet up. 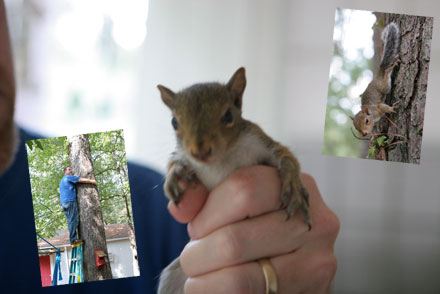