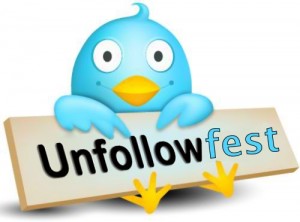 I’ve been urged to create lists on Twitter, to assign certain followers to lists so that my Twitter stream doesn’t become unwieldy. In my continuing experimentation with social media over the last two months, I’ve arrived at another conclusion.. I don’t have to know what everyone thinks. And I don’t have to listen in on everyone’s conversations.

I hit a wall of realization the other night that life is quieter and better for me when I’m not sifting through jibber jabber in my online media streams. So in the quiet of the evening, I had a private Unfollowfest. Here were a few of my criteria for unfollowing:

I unfollowed friends and strangers alike. I was an equal opportunity unfollower. As I told Carolyn later, I like some people better when I don’t know what they’re tweeting.

If you happen to be one I unfollowed, its not personal. Your life won’t be ruined by me not following you. Trust me. If your set your esteem upon your number of followers, you’ll be constantly seeking to conduct a half-life on the interwebs. You’ll find yourself mining for cute sayings or obsessively trying to scoop others like an investigative reporter. Face it, your tweets won’t go viral, and even if one does, what does that gain for you? Happiness? Joy? Everlasting rep in the Tweet Hall of Fame? I’m sorry, but here’s a quarter; get a life.

Try downsizing your social media stream. You may discover you enjoy focusing on the input and contributions of better quality rather than the incessant chatter of folks who use Twitter as mental toilet paper.

Facebook, you’re next. You scoundrel of a social media service, you’ve made it uncomfortable to “unfriend” someone, (it sounds so negative). An Unfriendfest sounds so much harsher. But it’s coming…