It’s Guest Bloggers Week(ish) with the theme of Their Story with the assignment of “an experience that has shaped who you are today.” Today’s guest is Jacob Moyer.

Jacob is a medical school student here in Blacksburg and a member of our church. He served as an intern for a season, and in all the time I’ve known, Jacob has been intent on making dreams come true – not just his own but others. He is truly one of the most sensitive, helpful and encouraging young men I know. He’s a dynamic follower of Jesus, and I’m thankful he agreed to be a guest on my blog. 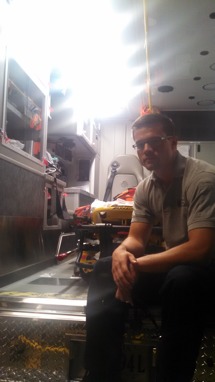 I’m awoken from sleep
With a tone and a beep.
A voice speaks calmly without yelling or screaming
There’s a man in his bed who’s not moving or breathing.
I throw on my boots and I run down the stairs.
Jump in the truck, flash the lights as the siren blares.
We speed down the street and run into the house
Check a pulse, pump the chest, stick a tube in the mouth.
Drill a hole in the leg and get some drugs to the heart,
Check a rhythm, send a shock, the wife falls apart.
Check a pulse, Call the doc, “this is what I got..
Not even the wife’s scream
Will move the line on that screen.
I think it’s time we stop.”

I have one week left of my first year of medical school! Over the course of the last 11 months I have taken over 75 exams and sat for over 500 hours of lecture. While I marveled at the intricacies of the body that God created for us, it didn’t take long for me to develop a severe case of medical student hypochondria. In musculoskeletal block, I could have sworn I separated my shoulder while working out and every time my knees popped while walking up the stairs it was most definitely a torn ACL. That semester came and went and I began to study Neurology. I slowly convinced myself that the headaches from caffeine withdrawal and the dull ache behind my eyes from lack of sleep was really a manifestation of a brain tumor or some rare neurodegenerative disorder. My neurodegenerative disorder subsided as we began to study cardiac and pulmonary disorders. Every random chest pain was a pulmonary embolism and the fact that the ribs on the left side of my chest protruded further than those on the right could only be explained by a congenital defect. As comical as it was to hear myself list off self-diagnoses the harsh reality of the medical knowledge I was obtaining began to seep into everyday life.

The man with the barreled chest, pursed lips, and labored breathing that slowly walked into the bakery as I was eating breakfast most likely had advanced emphysema, a terminal diagnosis. The women with a broad neck and short stature that walked into Moes for lunch had Turner Syndrome. The chromosomal abnormality could have left her with congenital heart disease, a malformed aorta, or other heart defect that could significantly reduce her life expectancy. It began to hit closer to home when I learned that 50% of elderly patients who experience a hip fracture will not live past a year. My grandmother had one two years ago… How much longer will I have her?

A few days before Christmas we were called out on rescue for a patient not breathing. We went through all the procedures but the patient couldn’t be resuscitated (The movies give CPR a very inaccurate success rate). A week later a friend passed away unexpectedly and another committed suicide. A brain tumor took another just a few days after that. Death, it seemed was quickly becoming less of an acquaintance and more of an unwelcome friend.

One long night when the blank faces of the broken bodies I have seen during my time on the rescue squad were particularly haunting, I wondered what message the Lord could possibly teach me in the midst of so much grief. Although, I know I will not understand this issue fully until I reach the other side of eternity one message seemed to stick out over the others: the treasure hidden within the normalcy of death is the extravagance of life. Stop trying to live like you are dying, and start living like were all dying.

I am still drawing conclusions as to how this should affect my physical and spiritual life practically. Our culture is so fascinated with the idea of “live like you were dying” it is easy to rattle off several clichés about what it would be like to live like we were all dying. For now, I am trying to learn humility and how to serve someone in a way that is most meaningful to that individual, in a hope that one day they might ask me, “Jacob, I’m dying to know why you did that for me?” So that I can reply with “because I was dying… and Jesus did it for me.” 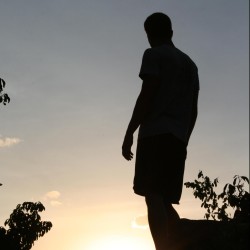