It’s Guest Bloggers Weekish with the theme of Their Story with the assignment of “an experience that has shaped who you are today.” Today’s guest is Jeremy Woodall.

Jeremy and I have been friends a loooong time. When I first met him, I was the BCM Director in Monticello, Arkansas, and Carolyn and I had volunteered to be youth chaperones for a camp for First Baptist Church. Jeremy was probably in 7th grade then. He blogs at Disciple in the Making. We bloggers appreciate your visits and comments, so swing by and tell him hi.

The past few months have been an incredible blessing for Becca and me. We found out in February that we were expecting a baby! The Lord has brought us through an incredible season with allowing us to go through the pain of losing a child last year through miscarriage, to consistently redeeming our pain and hurt through blessing after blessing. At almost a year removed from our loss, we were greeted with the news of an ultimate gain in finding out we were expecting once again! A few weeks ago we found out that this September we will be expecting a baby girl. Willow Grace!

With technology we can know more about babies, and so much other things than we have never known before. We learned from an app that we are using to track the growth of Willow that she is already having dreams due to the fact that babies develop their sleep-wake cycle in the womb. This is incredible! My mind quickly turned to stories that I am hearing of Muslims that are turning to Christ because of “Visions”, or dreams, in which they are seeing Jesus! For the 1,400 plus years of Islam’s existence they have resisted the Gospel but now are turning to it because they are dreaming about Jesus!

So I have begun to pray that Willow will dream about Jesus. Yes, 27 week old Willow. People may think that is crazy, but I know that the God that is still creating and developing my sweet little girl, that is developing her brain, can put visions of His Son in there. I am praying that Jesus will start to enter her brain because I am already praying for the day that she will ask Him into her heart.

I also pray that our hearts, visions, dreams, and lives will be filled with the Son. 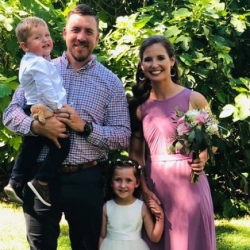 Jeremy Woodall
Campus Minister at Baptist Collegiate Ministry
Jeremy Woodall is beginning his fourth year as the Campus Minister at the University of Arkansas at Monticello Baptist Collegiate Ministry. Jeremy has been married to his wife, Becca, for nine years and they have two beautiful children. Willow, five, and Cash, two. Jeremy’s favorite hobby is going on adventures with his family. They love camping in their fifth-wheel and hiking. When Jeremy isn’t enjoying time with his family, he enjoys spending time in the woods hunting, and fishing in his kayak.

Jeremy loves spending time sharing Christ with students and discipling them in their relationship with Christ. He loves spending time cheering on the Weevils and Blossoms at UAM. When Jeremy isn’t on campus he loves serving the local church by supply preaching as well as developing interpersonal relationships with local ministers.