They want a Wii 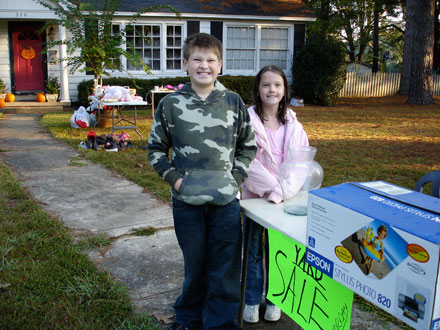 Some great friends of ours have moved to Monticello from Arkadelphia, and their son was the recent recipient of a Nintendo Wii. It was a parental gift to ease the transition to a new town, I suppose. Sam and Adelyn both have been invited over to play the Wii, and it’s even been brought over to our house for an afternoon and evening.

I must admit that I was rather engaged in watching them play! It’s completely interactive, and just watching someone swing their controller like a baseball bat or a tennis racket and seeing the result on the screen is amazing!

Needless to say, Sam and Adelyn were hooked. Sam, of course, is my gaming buddy, but Adelyn has never gotten into gaming that much. However, she was totally enthralled with the Wii. In addition, Nintendo has always had great game selection for kids and adults.

The kids were told that if they could come up with the money, they could buy their own Wii.

So… all this week, they’ve been piling up junk in the hallway for this weekend’s yard sale! It’s been rather funny. I actually think they’re going to make quite a haul. Sam’s Playstation 2 (the fat one) has already sold for $110 on Ebay (with several games and three controllers); both of their Nintendo Gameboy Advance SPs are listed on Amazon. When you throw in my 19″ Sears TV that my dad bought me during my senior year in college, a very nice inkjet printer and a bunch of other junk, I think they’re going to surpass their goal.