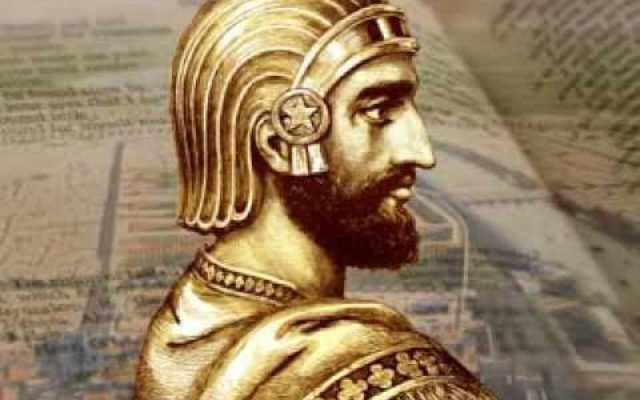 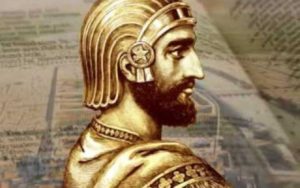 No, I’m not saying President Trump is acting like a king. Some of you will want to dispute that. This post isn’t intended to be political. My purpose is to help us think beyond partisanship to sovereignty. Let’s talk about the curious case of Cyrus, King of Persia, ca. 559 BC as it relates to Israel and their captivity. If that piques your interest, let me give you a quick history lesson.

Because the Bible offers us unique and accurate historical information, we can begin with the last verse of Isaiah 44:28:

[I am the LORD who made all things], who says of Cyrus, ‘He is my shepherd, and he shall fulfill all my purpose’; saying of Jerusalem, ‘She shall be built,’ and of the temple, ‘Your foundation shall be laid.’”

It mentions Cyrus, king of Persia. According to the historian Herodotus (46BC), Cyrus was the son of Cambyses I. He came to the Persian throne in 559 B.C. Nine years later he conquered the Medes, thus unifying the kingdoms of the Medes and the Persians.

Cyrus is mentioned 23 times in the Old Testament. Isaiah refers to Cyrus as a “shepherd,” the Lord’s “anointed.” He is specifically mentioned as being part of God’s plan to bless His people – and get this – he’s mentioned 150 years before he ever sits on a throne! In other words, before Cyrus was born, God had a purpose for him.

In context, as a nation, Israel had turned their backs on God. The Lord sent them warning after warning, through prophets and divine circumstances, but their disobedience eventually led to the destruction of Jerusalem by Babylon, including the temple, and the Jews were taken captive to Babylon. (Think Daniel, Shadrach, Meshach, and Abednego, lions’ dens and fiery furnaces.) This took place about 586BC.

Eventually, the Babylonian Empire would be conquered by the Persians, led by… Cyrus. And guess what Cyrus did?

Now in the first year of Cyrus king of Persia, that the word of the Lord by the mouth of Jeremiah might be fulfilled, the Lord stirred up the spirit of Cyrus king of Persia, so that he made a proclamation throughout all his kingdom and also put it in writing: “Thus says Cyrus king of Persia, ‘The Lord, the God of heaven, has given me all the kingdoms of the earth, and he has charged me to build him a house at Jerusalem, which is in Judah. Whoever is among you of all his people, may the Lord his God be with him. Let him go up.’” (2 Chronicles 36:22-23) 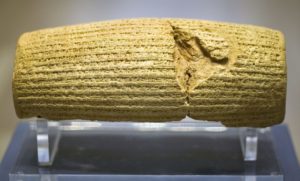 Google the Cyrus Cylinder! Or read this devotional.

Here’s the significance: a pagan king commissions the rebuilding of the temple of God in Jerusalem! This same king was prophesied – by name – 150 years before he was ever a glimmer in the eye of his dad, Cambyses I. God uses world leaders who don’t know Him to bless His people and accomplish His purposes.

The reference in the 2 Chronicles passage above to fulfilling Jeremiah’s prophecy refers to a message the Lord had given that prophet. The people of Israel would only be held in captivity for 70 years. So when they were finally deported to Babylon, the clock began ticking. 70 years later, Cyrus takes the throne, and one of his first acts is to send the exiles back to Jerusalem – with money and resources to rebuild! (See the Old Testament books of Ezra and Nehemiah).

God uses a world ruler who didn’t claim to know Him to bless His people.

What about Donald Trump?

One thing we can all agree on is that President Trump is a lightning rod for controversy. I don’t know if he has a personal, genuine faith in Jesus Christ. Some say that he made a decision for Christ last year. Certainly he has not acted like it much of the time. The nation has winced at his invectives and been ashamed of his language. He seems to be embody the opposite of James’ counsel to Christians: “Everyone should be quick to listen, slow to speak and slow to become angry.” (James 1:19)

And yet… there are encouraging signs of support for Christians from this new world leader.

Did you know that Christian persecution is at the worst levels of persecution in modern times? According to David Curry, president and CEO of Open Doors USA,

“The spread of persecution has gotten worse, now hitting nearly every continent in the world.” (Source)

And yet… Trump has said:

[Christians have] been horribly treated. Do you know if you were a Christian in Syria it was impossible, at least very tough to get into the United States? If you were a Muslim you could come in, but if you were a Christian, it was almost impossible and the reason that was so unfair, everybody was persecuted in all fairness, but they were chopping off the heads of everybody but more so the Christians. And I thought it was very, very unfair. So we are going to help them. (Source)

“The king’s heart is a stream of water in the hand of the Lord; he turns it wherever he will.” (Proverbs 21:1)

I think one thing that the prophets Isaiah and Jeremiah might say to 21st century people of God: “Follow God with all your heart. And when things are discouraging, remember… God can bring help from anywhere. He is in control. Do not fear.”

If you want to read more about Cyrus, check out this site.