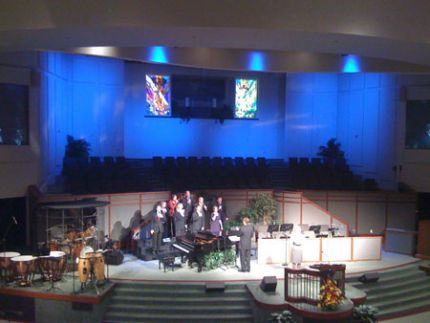 Tom Elliff, one of the VPs at the International Mission Board, is preaching this a.m. He’s speaking on the role of the Holy Spirit from John 3.

Flesh gives birth to flesh, but the Spirit gives birth to spirit. You should not be surprised at my saying, ‘You must be born again.’ The wind blows wherever it pleases. You hear its sound, but you cannot tell where it comes from or where it is going. So it is with everyone born of the Spirit. (John 3.6-8)

“What has scared us away from this subject is we see so much that is inane and stupid – this glitzy, glamor boy Christianity – that people of integrity avoid it.” Elliff goes on to urge us to know, relate with and be directed by the Spirit.

Nicoemus said in verse 9, “How can these things be?” Jesus was a little perturbed, it seems, that one of Israel’s religious leaders didn’t have a clue about spiritual rebirth and the work of God’s Spirit. Elliff acknowledged that much about the Holy Spirit is mysterious.

Speaking of the mystery of the Holy Spirit, Elliff said –

He concluded his message by quoting the theme of the 2008 state convention, “If you’re going to succeed at ‘Reaching Gen X now,’ don’t forget to rely upon the Holy Spirit.

In spite of the plethora of Ps – which normally distracts me when a speaker relies upon forced alliteration – I really enjoyed this message and am hoping to get a CD of it.