I am loving Twitter. I am an unabashed Twaddict. I play with my Twitter daily. And I Twinkle on my iPhone occasionally.

Twitter users will know what I’m talking about. Others will be ready to censor Notes from their RSS feeds. However, I was recently recommended a site by another Twaddict – AJ Huffman – that I think is a must sub for all Twitter users and those considering it. It’s called TwiTip.com.

Essentially, Twitter is like a mass status update. But it’s so much more. Organizations are using it to keep people updated. Barack Obama used Twitter in the election. Sure, there’s Twitabuse. But that’s no reason not to step into this world of microblogging to make new friends, extend your network, and leverage your influence.

Most newbies on Twitter, including myself, forget to use the “@” symbol to indicate a response to another user. In addition, there is simply too much conversational Twitter when a direct message or a direct text would suffice.

In addition to these, here are some fantastic entries for Twitt-ed:

As an example of how confusing conversational Twitter can be to the Twitterverse… What would you assume the following Twits are talking about? These are verbatim Tweets on Monday, December 1…

And these are some parts of the same conversation from Facebook:

What it’s all about…

Just curious. How many of you can gleek? (If you don’t know what it is, that answers the question.)

Gleeking is defined by Wikipedia as “the projection of saliva from the submandibular gland upon compression by the tongue.” I’ve always wanted to be able to gleek on command, and the reason I sent out this Tweet earlier today was because I shocked myself with a completely unintentional spray of saliva across my desk this morning. I spent several moments in euphoria, wondering if I had suddenly been given this gift by God. It was with great disappointment that I learned that I could not reproduce it. It was an accidental gleek. Darnit.

But back to the power of microblogging… I’m still getting responses on Facebook from this morning’s update. It’s amazing how a simple microblog can connect and involve folks from all over the world in a moment. It’s a new day.

And here’s a nice new site to help you chart your Twitter activity: TweetStats. It produced the graph below. You can see the rest of my stats here. 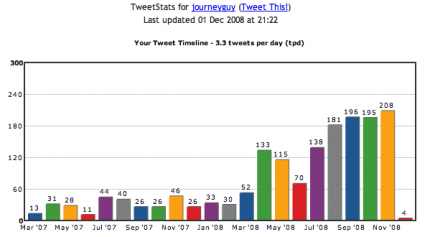