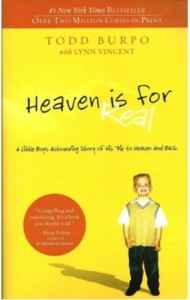 It’s been disconcerting to watch the religious media establishment uncritically bless and aid and abet the book Heaven Is for Real into becoming a runaway bestseller. It’s been made into a movie. Christians from all spectrums are reading and recommending it on social media. They may not have read Colossians, but they’re reading Todd Burpo’s account of his four year-old who died and came back from heaven. At least, in the famous words of renowned theologian Collin Raye, “That’s his story, and he’s sticking to it.”

If you’re making millions from it, wouldn’t you?

Christian leaders are finally sticking their heads above the fray long enough to say, “Hey, uh….” It’s a timid, almost apologetic interruption into the Christian media frenzy. Pastors who do speak up are immediately criticized as being judgmental, harsh and even envious.

That’s why I was proud of Pastor David Platt for his comments at The Church of Brook Hills Secret Church seminar recently:

In conjunction with his thoughts, he tweeted:

Leaders, point people to Jesus, not the latest fad book that the religious industrial complex wants you to consume.

Platt points out that Heaven Is for Real is only one of dozens of such “there and back again” books on the market. Due to the age of Burpo’s son, the story is cloaked in an endearing figure, but the truly endearing figure, the center point of heaven – namely Jesus Christ – is conspicuously absent. Platt is 35 years old.

Pastor John MacArthur is twice Platt’s age (75) and has written about how the stratospheric sales of the book actually reveal the public’s hunger for heaven.

…the current popularity of such books shows how hungry people are to hear about heaven. There is nothing inherently wrong with that, of course. In fact, it is a desire that can be harnessed for good, as long as we look to Scripture and let God’s Word inform our knowledge and shape our hopes. (From Heaven Is Real; Hallucinations Are Not)

There is simply no reason to believe anyone who claims to have gone to heaven and returned. John 3:13 says, “No one has ascended into heaven except he who descended from heaven, the Son of Man.” And John 1:18 says, “No one has seen God at any time.” (From Are Visits to Heaven for Real?)

So who are we to believe? Burpo or the Bible?

Many will ask, “But how did the little boy know such strange facts that he couldn’t have known?”

Here are a few possible answers:

Or it could be something a little more uncomfortable:

Here’s a question to close: Does the book/movie prompt joyful obedience to Jesus Christ in you?

My concern is that it doesn’t. I think it just makes people feel better for a moment. It’s a false assurance. It’s like 7/11 at 7/11 – free Slurpee day. Sugary sweet but with no lasting benefit.