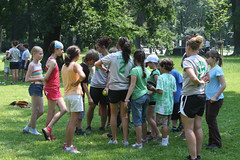 We had a blast.

When you bring a mission team overseas, you always emphasize the “F” word. That’s flexibility. You just never know what will happen or how your plans will actually turn out.

Our hope all along for this trip was for the UAM softball gals to be able to conduct a sports camp for kids here in Krakow, to teach and demonstrate the sport of softball to a European town that cherishes soccer above all else and doesn’t even have a baseball field. That was our hope, and it was high.

We were so proud of the girls. They were more than champs. Not only did they conduct this impromptu, unstructured camp in a setting that was challenging, but they did so with joy and deep character. They showed the kids softball. But larger than that, they showed them their hearts. 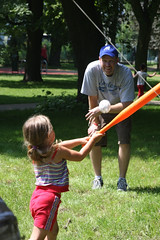 And while they were swinging bats and throwing balls, the Lord was behind the scenes hitting homeruns. One of the leaders of the Krakow YMCA “just happened” to be in the park, and he offered the use of their building this week should it rain. He also wanted to coordinate future things with the missionaries here. A great contact!

After a wonderful afternoon in the Rynek Square, we went to another location, and the girls worked with a newly formed guys baseball team. Baseball was new to them. So were girls who could outplay, outhit and outthrow them. I think it was a little difficult on them in this culture getting trained (and schooled) by girls.

One of my favorite moments of the day was when Becca and Amy suited up and threw pitches. The loud pop of Becca’s glove hitting her leg after her pitch, followed instantly by the louder pop of the ball in Amy’s glove was pretty awe-inspiring. The kids and later the guys watched in awe. So did we.

All the girls found key roles to play, and when we had our devotional time last night in the hostel (the Techno Twins weren’t around), we celebrated and unpacked a full day of ministry after Tracy shared about Elijah from 1 Kings 18.

We are all grateful for your prayers and your generosity that got us here. God is at work. Will you please continue to join us in this great work with intercession? More later! 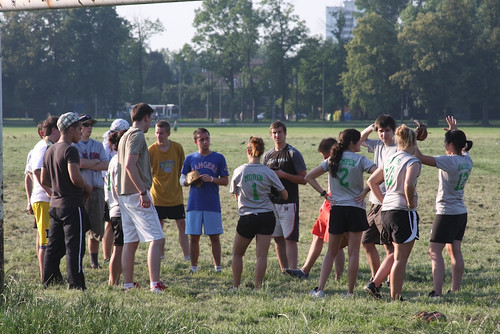