I’ve been a fantasy football coach since 1992. One of my best friends on the planet – Mitch Bettis – and I have been in a league together almost every one of the past 17 years. Funny thing is I got married in ’92 as well. So two great things happened that year. I’ve won four fantasy football championships in my lifetime. I rarely win arguments with Carolyn. But that doesn’t stop me from trying…. Just kidding, honey. Really.

This past weekend was kickoff weekend for our league, and it featured an epic father-son struggle. You see, Sam is in my league, and the random schedule generator pitted our teams against each other this weekend. We talked smack back and forth to each other this past week. I made fun of his girlie team, and he made fun of mine. We both offered other teams trades in an attempt to position our teams for the win.

On Sunday, the battle began, and when the smoke cleared Sunday night, I was winning by 20+ points. But he still had the Patriots defense left to play… against the Buffalo Bills. I was sweating it. Luckily, I had to go to Richmond on Monday, so I wasn’t in the house for the Monday night games. I didn’t want Sam to see me chewing my nails and bemoaning my inevitable defeat to Darrell Cook.

I watched in butt-clenching agony as the Pats swarmed Trent Edwards for a devastating sack in the final seconds as Buffalo attempted to comeback from the Pats’ astounding comeback. The final gun sounded. The players exited the field. The Pats emerged victorious in a nailbiter, one-point contest, 25-24. And so did my anemic team – 145-144.

I haven’t talked to Sam today, but I’m getting my victory dance and speech ready. I will do my best to be humble and to model for my loser of a son what a great fantasy football coach I am… 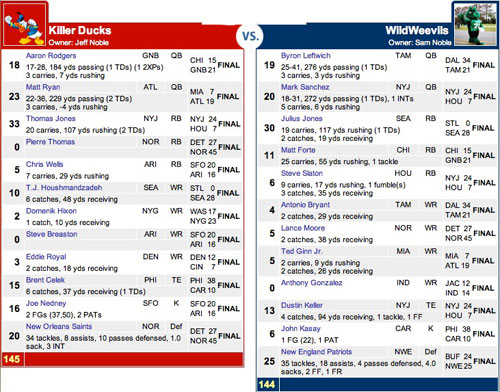