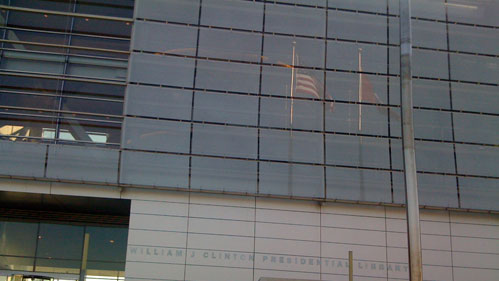 We’ve been preparing for some time for Sam to be a page in the Arkansas Legislature this week. Adelyn got to experience it last week, and when I asked Sam over the weekend if he was excited about the learning experience, he replied, “Well, yea. I get to get out of school for three days.” So much for a thirst for knowledge and all that kind of stuff. Must have inherited his study genes from his mother.

We left this morning early to make the trek to Little Rock. His friend, Cody Pigott, was with us, and all was set. However, about half way there, we received bad news. Alan Maxwell, our Representative and friend, called to sadly inform us that the page office had called to say that they already had too many pages for this week. So Sam and Cody got bumped. It was a disquieting moment in the car until I piped up and said, “Well, you’re out of school already. So let’s go on and have some fun!” They brightened up a little but then got positively giddly upon the mention of a trip to Party Time Pizza. The prospect of video games trumped making copies for a bunch of old guys, and so the adventure began. 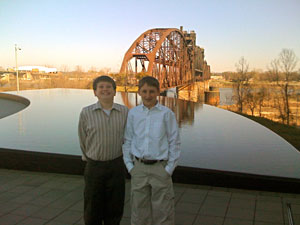 Their spirits dampened just a bit when I insisted on including something educational in the trip – a visit to the Bill Clinton Presidential Library. They were further bothered by the fact that I wouldn’t let them change clothes from the dress pants and shirts into standard redneck. I did allow them to remove their ties. What a great guy I am.

We saw reproductions of the Cabinet meeting room, and the guys got their pictures made in the President’s chair. Then it was off to look at the reproduction of the Oval Office. Both had an element of, well, snooze-ville. Maybe I was looking forward to Play Time Pizza, but the library was more impressive as a building than a presidential library.

And then there was the informational movie in the mini-theater. The Clinton bragudrama was particularly off-putting. In the moments that Clinton wasn’t claiming to be the greatest President since George Washington, it was actually inspiring. However, when he was talking about himself, it seemed like propaganda. Of course, that was a big portion of the movie.

We exited the theater, and we were walking toward the elevators when a rather large, imposing security guard stepped in front of me and said, “Sir, where is your sticker?” I confusedly looked down at my shirt where I had fastened it. It was gone.

A little background: when we bought our tickets, they gave all of us round library stickers and instructed us to put them on our shirts. While the Clinton Presidential Library was built entirely with funds from private donations ($160 million worth), because they house the archives of a former President, it became the property of the government upon dedication and is now staffed by very observant, large security guards that scrutinize stickerless people. 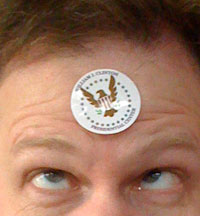 The guard’s expression was unreadable. It’s funny how when you don’t know people, you have no idea exactly what they mean. I nervously interpreted him to mean, “Without your sticker, we have no way of knowing if you’re a tourist or a terrorist. I’m about to knock you down and beat you to Gitmo if you don’t produce a round library sticker.”

Sam and Cody looked me over from a distance, with slow smiles emerging across their faces. I really had no idea what was going on.

“I really don’t know where it is. It must have fallen off,” I said to the guard. A couple of movies flittered across my mind: The Fugitive – an innocent man runs from the law after being falsely accused of wrongdoing. The Pink Panther (with Steve Martin) – a scene in the airport where Clouseau conceals hamburgers in his pockets and is tackled by security guards who think he has a bomb.

As these unwanted images flashed across my cortex, another, more unsettling reality manifested itself. The security guard was smirking and… I really thought he was eyeballing my crotch. There it was again. He was slightly nodding and drawing my eyes to my own crotch with his. There are children present, I wanted to scream!

It was then that Sam openly laughed. I took in the whole scene in a microsecond. Sam and Cody standing a few paces away, openly snickering. The security guard planted firmly in front of me, accosting me with his ocular advances. One of the older lady volunteers walking up to see what was going on. A beautiful view out the windows of the third floor of the Arkansas River and the old train bridge.

The guard said to the boys, “Why don’t you tell your dad where his sticker is?”

I looked quickly at Sam, ready to ground him for three years if he had it. “Um… look down,” he said.

I looked at my crotch. Unwillingly. But I looked… And there was my sticker.

Yup. It was fastened firmly to my slacks, front and center. It looked as if it had been intentionally placed.

I hastily jerked it off and thought about offering it to the guard, but he was now smiling as well. I thought twice and placed it back on my shirt. I mumbled a “thanks” (what was I thanking him for?), and he moved aside and said, “Have a nice day.”

Sam and Cody, under intense cross-examination, (the same kind that Clinton withered under in the Lewinsky affair) convinced me of their innocence. The only thing we could all figure out was that the sticker had fallen off my shirt onto my crotch during the movie. It was the perfect fall. That also meant I had walked just about the entire tour – through the Cabinet Room and Oval Office – with a Bill Clinton Presidential Library Sticker on my crotch.

We left there and made a few stops before discovering Play Time Pizza was closed on Mondays until 4 p.m. We wound up at Chuck E. Cheese where kids can be kids and adults can go in debt. It was there that I remembered that I preached on humility yesterday…