Why I’m not a Hog fan 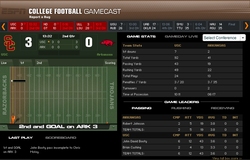 This entry could also be titled, "Why Houston Nutt must go." Let’s just say this… completely predictable offensive game calling. Since 1997, Arkansas fans have defended Nutt, but it’s just nuts to continue.

I quit watching the game this evening when it was still 3-0. Approximately 1 minute later, USC scored to make it 10-0. I predict another humiliating defeat, in spite of excellent defensive play by the Hogs in the first quarter.

I’m so tired of Arkansas football. Honestly. I would love to be proven wrong, but in the past 38 years of my life, I’ve not been. Sure, there are a few great games each season. I won’t argue with that. But the Hogs have not/can not/will not seal the deal.

I’ve said for the past several years that they desperately need to hire an offensive coordinator, but Nutt remains at the helm. Of course, so does Frank Broyles, the titanic personality behind Arkansas sports. Broyles has served since 1974 as Arkansas’ AD, and in my uninformed opinion (along with every other Razorback fan) may be the continued cause of multiple Hog sports shipwrecks. His personality and ego are just too big for any other ship in the sea to maneuver. If Nutt would just admit his own inept offensive intuition, he might have a chance to go down in history as a great coach. As it is, he’s just a great guy, but only a good coach. He has an overall win-percentage of 58.8% as Arkansas’ head coach, and that alone will not earn you a spot in anyone’s top 20 polls at the end of the season. 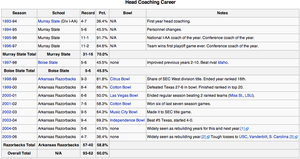 If it’s just about money, then keep him. The UofA continues to rake in an alarming amount of money from Razorback paraphernalia – enough to justify Nutt’s annual $1.5 million contract. I imagine there are several profs at the UofA making a far greater impact into students’ lives, but in our American upside-down prioritized culture, we’d rather reward inanity than intellect. (Ooooo. I know I’m gonna get some nasty comments after this.)

So anyway… here I am, a little cooled-off now. I’m actually disappointed in myself for turning on the TV to begin with. Whew. I feel better. For the rest of you Hog fans who will discover this later and be incensed… a simple question… was it worth watching?

Houston, we have a problem. It’s you. Hire an offensive coordinator with intuitive feel for the game of football or move on.

57% at the Arkansas Traveler say Nutt should be fired… (no, I haven’t voted)

Nutt’s teams have also been noted for a series of overtime games
including the two longest overtime games in NCAA history. His teams
have also made several record-setting comebacks which are unusual for
teams that rely primarily on the running game.

Nutt has been
criticized for uninspired play calling and his unwillingness to hire an
offensive coordinator. Many critics point to a poor record versus teams
with winning records and claim that Nutt’s win-loss record is inflated.
They also point to Nutt’s poor bowl record and the fact that several of
his critical wins have been of the "hail Mary" variety.

I say a win’s still a win, but when will we get more wins? Oh, and Coulter/Slaughter, please don’t start singing your favorite worshhip chorus, "Just Wait Til Next Year."

Update:
Karl called me out on my facts already. See the comments. He pointed out that Arkansas has already hired an offensive coordinator this past January…. 8 months ago. Since I’m obviously not a Razorback horn-blower, I missed it. However, the welcome hiring proves my point. Or does it? Guz Malzahn was Mitch Mustain’s head coach at Springdale High School. Looks a little like an attempt at collegiate nepotism to me. Get a lock on the nation’s #1 QB prospect by hiring his head coach. Good move, Houston. Now, if they’d only played him in this game…