Why you’d better speak up, cherish and remind one another about the preciousness of religious freedom

I nodded my head through the article in World Magazine by Ken Blackwell. It was titled How religious freedom has become a non-issue in our country. Read the title again slow. Then imagine any single one of our nation’s forefathers or Revolutionary soldiers hearing that and not being dismayed. Religious freedom is a precious tenet from our founding, yet it has been consistently denigrated, ignored and appallingly disregarded by our nation’s highest leaders in recent years.

Quoting from the article above:

James Madison wrote in his Federalist 51: “In a free government the security for civil rights must be the same as that for religious rights.”

…He had been the legislative champion of Thomas Jefferson’s historic Virginia Statute of Religious Freedom, which, for the first time in history, established not a specific religion or a particular church but religious freedom itself.

Upon its passage by the Virginia General Assembly in January 1786, Madison proudly wrote to Jefferson in Paris that the statute would “add to the lustre of our country.” …Jefferson while in France eagerly translated and distributed the handiwork of his state’s lawmakers. No late 18th century European state, monarchy or republic, could begin to approach America’s new standard for religious freedom. And few nations since then have attained that highest standard.

Not only did this widely commented upon Virginia statute create a sensation among the philosophes of France and the Enlightenment thinkers of Europe, but America’s religious freedom also began a surge in immigration by common folk yearning to breathe free.

How far we have come when American Christians can idly read the news of destroyed churches and Christian martyrs in Pakistan, Egypt, Saudi Arabia and other corners of the world where the present political leadership of our country sends guns and weapons to factions that oppose religious liberty so violently that there are forced conversions to Islam under penalty of death? Consider Kirsten Powers’ article in  The Daily Beast: A Global Slaughter of Christians, but America’s Churches Stay Silent.

Christians in the Middle East and Africa are being slaughtered, tortured, raped, kidnapped, beheaded, and forced to flee the birthplace of Christianity. One would think this horror might be consuming the pulpits and pews of American churches. Not so. The silence has been nearly deafening.

Christians – particularly young Christians – need to wake up. To their defense, they are being fed a diet of self-consumption by our media and news outlets. The recent revolution in Egypt was an international political earthquake of turmoil and religious persection, but few Christians were aware of the realities of what was taking place. It was the manner in which our media portrayed the event. The Daily Kos ( a liberal site), decried the dumbing down of the news events by Time Magazine:

Yes, what you see is TIME devoting its cover in international markets to a critical moment in Egypt’s revolution – perhaps the most important global story this week – while offering Americans the chance to contemplate their collective navels (with a rather banal topic and supposition, to boot).

This is not an isolated incident, for perusing TIME’s covers reveals countless examples of the publication tempting the world with critical events, ideas or figures, while dangling before Americans the chance to indulge in trite self-absorption.

In the above-linked World Magazine article, Blackwell says that the media are complicit in keeping mainstream Americans ignorant of the religious ramifications of world events – and the persecution of Christians – because they themselves are decidedly not religious.

The media cares little about religious freedom. The famous Rothman-Lichter study of 1981 surveyed 240 journalists from the prestige press. Of course, 80 percent of them voted one way, but a whopping 91 percent said they never attended a religious service of any kind. No wonder CNN’s Bill Schneider could famously say that the media “doesn’t get religion.”

Christians are categorically uninformed because our primary sources of information are resolved to refuse to interpret current events religiously. When they attempt to do so, they almost always get it wrong. Christians may be kept “in the dark,” through traditional sources, but we do not have to stay that way.

I suggest adding a few excellent websites to your bookmarks and checking it periodically. Here are a few links (a few from another article I wrote about the persecuted church):

Our religious freedom must not be taken for granted. It should protected and promoted while we can. The sobering (and praiseworthy) reality is that the New Testament shows us that the church grows rapidly amid times of persecution.

A graphic shows the relation of persecuted regions around the world and church growth (Source): 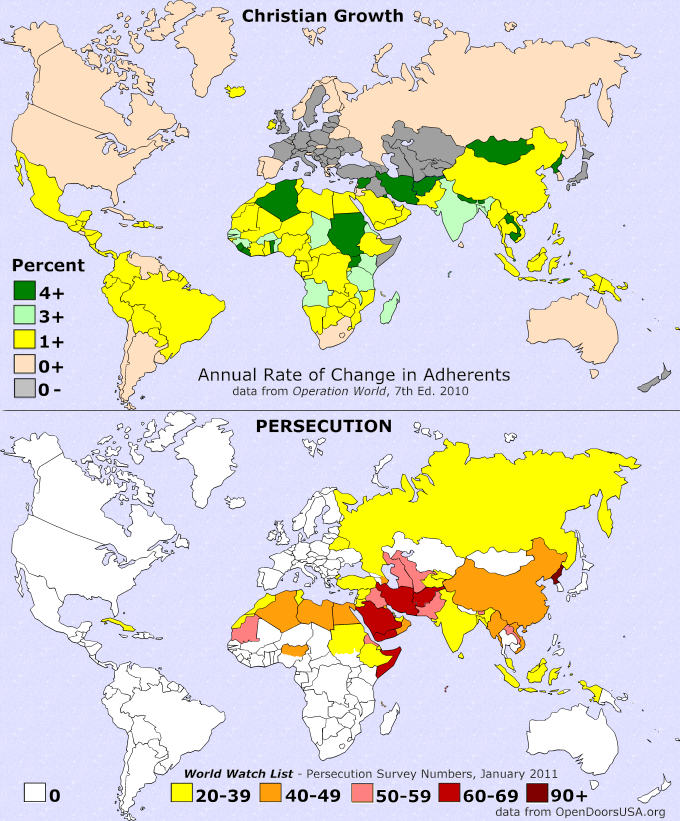 The same article observes that growth happens significantly when those who are being persecuted belong to that people group, because they stay (and die) for their faith. When those being persecuted don’t belong (think missionaries), they tend to leave or move from that area, and church growth does not happen.

Let’s not conclude too broadly, then, that persecution always results in church growth. Indeed, the bad news is that many times, it wipes out the churches:

Who wants to talk about when things went badly? That’s no fun.
So we forget about the church in North Africa That was once the thriving heartland of Christianity, but after the Muslim invasions, the church slowly receded into the background before fading entirely. And we fail to talk about Asia Minor (especially after the 14th century) and Japan (after Christianity was outlawed in the 17th century), other instances where persecution had disastrous consequences for the church. (Source)

Jesus shared with us:

Religious freedom is a novelty in world history. American Christians completely take it for granted, not understanding that while we assume it as a right, it can be taken away. We are seeing radical encroachments upon our religious freedom even in 21st America. The mandatory requirement of the provision of contraceptives in Obamacare is one such example that would seek to make many violate their consciences and religious convictions.

If you live in North America, today you are free-ish to practice your faith in the way you like. It may not always be that way. Get informed but hit your knees in prayer as well – not just for your own religious liberty but for those who don’t have it today. Pray consistently that if (or when) persecution comes that you will stand up under it, being faithful to the end.

“Indeed, all who desire to live a godly life in Christ Jesus will be persecuted..” (2 Timothy 3:12)