Wii Fit and a pregnancy test

That’s how you could sum up my Monday.

Adelyn got some money for good grades, and when she combined it with what she’d been saving, the next thing you know, we are the astonished owners of the technological fitness craze called the Wii Fit. I was skeptical at first, but after watching it and now playing with it for two days, I’m impressed. I knew it was a great invention when it gave me a Wii Fit age of 42 (only one year off) after measuring my weight, BMI, and testing my balance and other things. Carolyn didn’t fare so well. She has a Wii Fit age of 55. I have been offering to help her descend and ascend steps all day.

We started packing today. It’s a bittersweet moment, but pack we must. We have a ton of stuff, junk, and treasure that we’ve collected over 14 years here in Monticello. We began in the studio, and we spent most of the morning and early afternoon going through my books. I had 5 bookshelves full, and we sorted them out between books heading to my office at Northstar Church and books that I want to try to sell in a near-future garage sale.

In the middle of packing and sorting, there was also some cleaning. Carolyn stepped out at one point (conveniently enough). While she was gone, I noticed there was a basket on top of one of my bookshelves. As I began to empty it, my insides turned to ice when I saw a pregnancy test box. It was unopened. Still new. “What the…?!” I thought. Soon, however, I assured myself this was some strange anomaly. It was covered in dust.

When Carolyn returned, I pointedly asked her about it, and she couldn’t remember how it got there either. But for some reason, she thought it was extremely funny that I was quizzing her about it so anxiously.

With Sam gone to Kanakuk Camp this week, Adelyn has the run of the house. We went this evening over to our friends, the Saffolds, for the closing softball pool party. I was the assistant coach of Adelyn’s team. We had a perfect record. We didn’t win a game. All the trophies we distributed tonight said, “The Team With the Most Heart.” The girls didn’t seem to mind, and so Tim Chase and I drowned our coaching inadequacies in brownies and homemade ice cream. 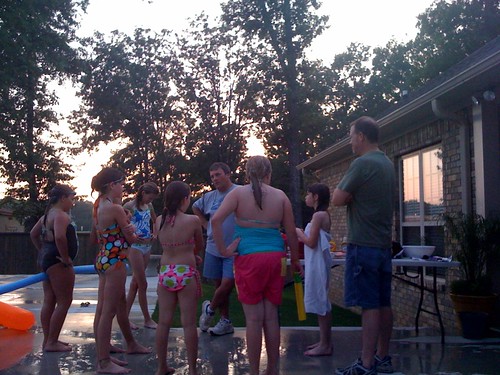