I wrote this many moons ago when I was a youth minister at a small church in Texas. Here’s hoping you can appreciate corny humor wrapped around some deep thoughts. 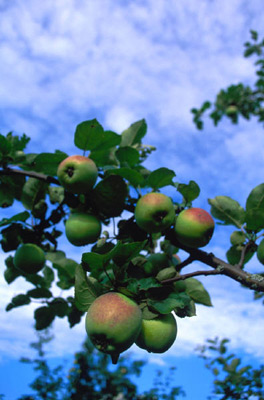 Both were planted at the same time by Farmer Brown. They grew up together, became fast friends, until one day Woody noticed the tumbleweeds blowing past. He became green with envy at their carefree way of life. The places they must get to see, the things they must get to do, he thought.

He decided to leave. Rooty tried to talk him out of it, but Woody just barked at him. “I want to branch out! I want to have fun and see the world.”

“I thought we were having fun,” Rooty said.

But Woody ignored him, packed his trunk, uprooted himself and took off after the tumbleweeds.

Rooty missed him greatly, but soon he noticed that he had become old enough to bear fruit — and what delicious fruit it was! It fed the birds, Farmer Brown and his family, and Farmer Brown even planted some seeds from the fruit that sprouted the next year and grew rapidly.

A few years later, Rooty was pruned so that he could bear even more fruit. The pruning was painful, but he knew it was necessary to be productive. He was very sappy, I mean, happy.

One day, Woody showed. Rooty was shocked at his appearance. Woody was just a stub of a tree, and he had only one root left.

“It was horrible,” Woody replied. “All was well until my friends the tumbleweeds hit the concrete highway – then they could travel great distances at fast speeds. I had problems keeping up because of my many roots, but most fell off which made things easier for me. That is, until I realized a few days later that I just couldn’t get enough to eat. The little roots I had didn’t supply my needs, and I began to shrink. Then I realized that those tumbleweeds were incredibly fickle. They just went wherever the wind blew. Sometimes, we’d end up right back where we started from. It was discouraging. And then I started to really examine my friends.”

“What did you find?” Rooty asked.

“They were all dead!” Woody cried to him. “There was no life in them! That’s when I started back here. I want to sink the root I have left deep so that I can grow and finally produce the fruit I was originally meant to.”